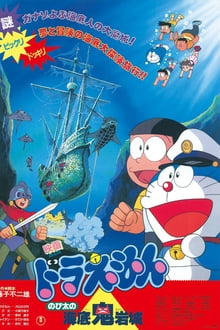 Original Title – Doraemon: Nobita and the Castle of the Undersea Devil (1983)
IMDB Rating: 6.9
Duration: 1h 34min
Genre:  Animation, Adventure, Comedy
Release Date: 12 March 1983 (Japan)
Director: Tsutomu Shibayama
Film Stars: Nobuyo Ôyama, Noriko Ohara, Michiko Nomura
Language: Hindi + Japanese
Subtitle: English
Quality/Size: Bluray 480p [290MB] | 720p [750MB]
Format: MKV
Movie Plot: Nobita and his friends under the waters of the Pacific Ocean. Gian and Suneo take Doraemon’s underwater vehicle and travel through the Atlantic Ocean, trying to find a treasure ship. Along the way, they learn that the eco gun that Doraemon used to protect them is running out of energy, leaving them vulnerable to the ocean. Fortunately, they have been rescued by some sea creatures. Doraemon: Nobita and the Castle of the Undersea Devil is the fourth Doraemon film, released in Japan on March 12, 1983. The film, directed by Tsutomu Shibayama, is based on the western myth of Atlantis, the Lost City. It is the highest-grossing animated film of 1983. Its remake is scheduled for 2022 release.