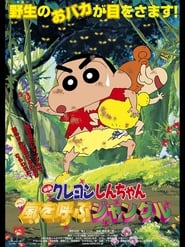 Shiro, including Shin-Chan and his parents, goes on a cruise for several days to meet action masks (actors) with his friends and families. But a group of monkeys attacked the ship and all the adults on board the ship were taken to an island at night.

The film begins when Mimiko Sakura was going to be killed by a person who is a rival to the action mask. But the action mask comes and attacks the man, but the man was so almighty that the action mask fainted and fell to the ground. And Mimiko Sakura was being tied with a rope and left on fire below (in fact he was tied up before the action mask came in). But unfortunately it becomes a suspense because it shows up to so much, which disappoints Shin-chan. He was watching that part on TV. And it also came on TV that if they want to watch the whole movie, they will have to go on a cruise. So Shin-Chan wanted to ask his mother. This was the first part.