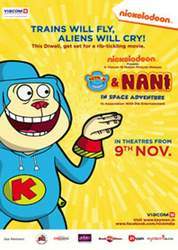 IMDB Rating: 5.6
Duration: 1h 40m
Genre: Animation
Release Date: 12 November 2012
Language: Hindi
Subtitle: Na
Quality/Size: HDRip 480p [223MB] | 720p [423MB]
Format: MKV
Movie Plot: Rohan and his magic monkey, Keemon, attempt a rescue mission after Rohan’s grandmother is kidnapped by aliens while on an adventure to Goa. Desi friends, Keemon and Rohan travel to Goa to visit their grandmother for a short vacation. The two are having the best of times with their audacious granny until one night when she mysteriously disappears into the woods after a meteor shower. This is followed by a series of shocking events with Keemon and Rohan having to save Nani from the aliens, which turns out to be the adventure of a lifetime for both of them.