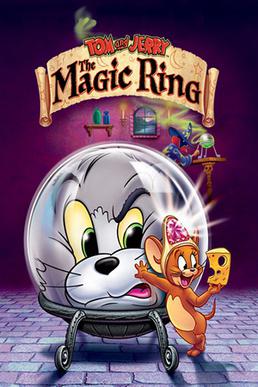 IMDB Rating:6.4/10
Duration: 1h 2min
Genre: Animation, Action, Comedy
Release Date: Video 12 November 2001
Director: James T. Walker (as James Tim Walker)
Film Stars: Jeff Bennett, Frank Welker, Charlie Schlatter
Language: Hindi + English
Subtitle: English
Quality/Size: Bluray 480p [202MB] | 720p [670MB]
Format: MKV
Movie Plot:Tom is put in charge of a priceless magic ring by his young magician master. He is horrified when the ring gets stuck on Jerry’s head, who then flees into town. Inside a haunted and scary looking mansion, Tom follows Jerry as usual, breaking everything in the process. Meanwhile, in the dungeon, Tom’s master, a magician named Chip, attempts to create a magic potion using his magic ring until he discovers it doesn’t work. Chip examines the milk cartons he uses, but there is no substitute for cow’s milk in Calcutta. Later, Chip throws Tom into the basement and orders him to guard his magic ring while on his way to Calcutta to milk the cow; If Tom does a good job, he’ll be rewarded with a big juicy salmon, but if not, Tom will be kicked out of the mansion “here’s one less kitty to do after the cleanup.” Chip then leaves for Calcutta using his motorcycle, leaving Tom to guard the ring in the basement. Unbeknownst to Tom, an ambitious Jerry finds the ring as he climbs up the table and puts it on his head, wearing it like a crown. Jerry runs out of the house, and Tom tries his best to find her so that he can get the ring back.